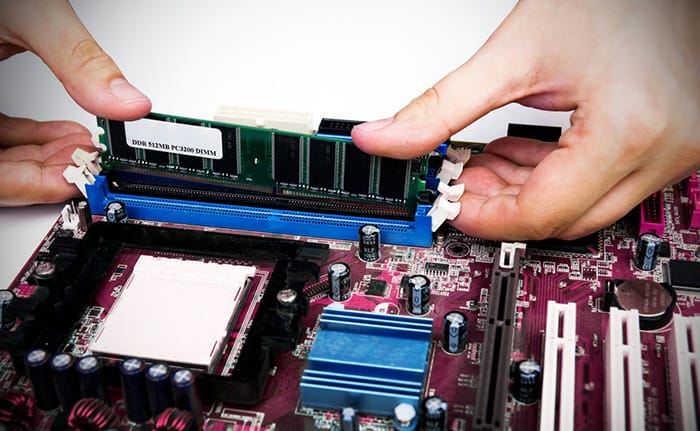 Does Memory RAM Have to Match?

RAM sizes can be mixed, but it’s often not recommended as it can decrease computer performance. It’s recommended to match RAM sticks by the same manufacturer, with the same size and frequency.

RAM (random access memory) is a necessary computer and smartphone component. The job of RAM is to remember computations for a limited amount of time, so that the computer processor doesn’t need to redo the computations every time.

This is often why RAM sticks are sold in kits of 2x4GB or 2x8GB, to ensure that they are identical and compatible with each other.

Some motherboards are very sensitive to this as it has to manage all the RAM using the same specifications of voltage and speed. This makes it more difficult to manage different sizes or makes of RAM.

Different sizes of RAM can be used together, but for them to perform optimally, the same voltage and controllers should work well with each other, and the motherboard. Usually for this reason, it’s recommended to use the same model in all slots.

Things to consider when buying RAM outside of kits:

Dual channel mode can run different size RAM sticks, but it won’t be optimal. For example, a new 8GB stick and an existing 4GB stick will perform as two 4GB sticks running side by side, while the remaining 4GB of the new 8GB stick will run in single channel mode. It’s not as fast as using two sticks of the same size, but it will be faster than before.

A 5% boost is minimal, but 5% more speed for free is a nice benefit, which is why users are recommended to use identical RAM sticks.

If there are more than 2 slots, 3 sticks can be used as well. One pair will run in dual channel mode, while the last stick will be in single channel mode.

For a guaranteed run, the exact same model and manufacturer of RAM stick should be used. Latency and voltage should also be the same for the best speed compatibility.

Can you Mix Different Brands of RAM?

You can mix different brands of RAM. However, for optimal performance the same brands should be used. As long as memory generation is matched, the computer should work fine.

Mixing different brands of RAM could lead to multiple issues such as power usage, responsiveness and power cycling. It can also cause problems with memory retention during regular use or at startup and shutdown.

Different brands of RAM also come with different voltages. Older modules usually work at a higher voltage and are not guaranteed to work at a lower one. One stick could be rated 1.5v to 1.65v while the other might be rated 1.35v to 1.5v, resulting in the computer running at the lowest compatible voltage at the 1.5v setting.

The best way to upgrade without causing any potential issues is to upgrade all of the memory to one brand at the same time.

Can you Mix Different Sizes of RAM?

Different RAM sizes can be mixed but computer performance may not be optimal.

An 8GB stick will need 8GB or higher or there may be problems with the computer.

Additionally, dual channel will not be accessible with different stick sizes. Dual channel is when two identical sticks of memory work together for increased performance. By utilizing dual channel, there could be a performance increase of up to 10% to 20%.

To utilize dual channel, two memory sticks must be identical in size and manufacturer.

Mixing different sizes of RAM is fine, but not recommended as you may lose multi-channel performance.

Can you Mix Different Speeds of RAM?

Different speeds of RAM can be mixed but it’s not recommended for optimal performance.

This is because the speed of two different sticks don’t match. The memory controller generally runs all attached RAM at the same speed and timing, so if one stick runs at 1600mhz and has a faster speed but the other is slower at 1333mhz, it has to run them all at the slower speed of 1333mhz.

Additionally, it may or may not run due to the difference in timing. Using the exact same speed of sticks is ideal to prevent running into any other problems and slower RAM speed.

Can you Mix Different MHZ of RAM Together?

Different MHZ of RAM can be mixed together but your computer will run at the slower speed.

One stick that operates at 1600mhz and another that operates at 1333mhz will force the 1600mhz module to automatically be downclocked and operate at 1333mhz. Using different MHZ of RAM may surpass the maximum speed of the motherboard and cause it to not run as well.

Even using the same speedsof different brands don’t guarantee a functioning computer, however. If the sticks don’t play well together multiple problems may crop up. Using the same MHZ and frequency of RAM is recommended for ideal performance.

Can you Mix RAM with Different Latency?

RAM with different latencies can be mixed together, but may cause performance issues.

Two different sticks of RAM with different latencies such as CAS 9 and CAS 11, the stick with a CAS 9 chip will be forced to run at a timing of CAS 11, which is not desirable as a lower number is faster.

All RAM modules will be forced to run at the lowest speed when there are different sticks.

If the different RAMS don’t mix well together, the computer may not boot consistently, or may not boot at all, alongside multiple performance issues that may occur. It is always ideal to use identical memory sticks when installing in pairs.

Yes, 2x4GB RAM and 2x8GB RAM can be combined. However there’s always a risk of the computer not operating correctly.

Different size of RAM sticks can be mixed and matched, but it should also be the same speed and latency to avoid any performance issues such as downclocked speed.

Combining different sizes of RAM sticks such as mixing 4GB and 8GB RAM, loses the ability to use the dual channel and decreases performance gain. Dual channel can only be utilized when two memory sticks are identical.

For better compatibility, it’s always better to use identical RAM stick sizes in the case of incompatibility with the motherboard. Either use the 2x4GB kit or the 2x8GB kit for all slots, not both.

Yes, 8GB RAM and 16GB RAM can be mixed together but there may be performance issues.

Matching the latency, speed and timing is very important in this case as some motherboards are very sensitive to different RAM sticks. The motherboard has to manage all the RAM using the same specifications of voltage and speed, making it ideal to use identical RAM stick sizes for better performance.

Different size of RAM sticks also could have different speeds, forcing the faster RAM speed to be lowered to match the other stick.Dual channel mode is also dependent on using the same size of RAM sticks, so using 8GB and 16GB would disable this and lower performance.

Using the same size of RAM is always recommended for optimal computer performance and unwanted errors such as motherboard incompatibility and stability issues.

To prevent these issues from cropping up, it’s recommended for users to use the same brand, size, speed and latency of RAM sticks for all slots. Users can also enjoy a performance benefit by utilizing the dual channel with the same size of RAM sticks without needing extra hardware.

Overall, mixing and matching different RAM sizes, speeds, and latencies generally will not cause any serious issues such as crashing or freezing, but the user may experience lower performance on the system. Besides that, there may be incompatibility between the different RAM sticks with the motherboard.